But did you know the community is sited near some amazing Florida history? Amelia National’s hometown of Fernandina Beach, 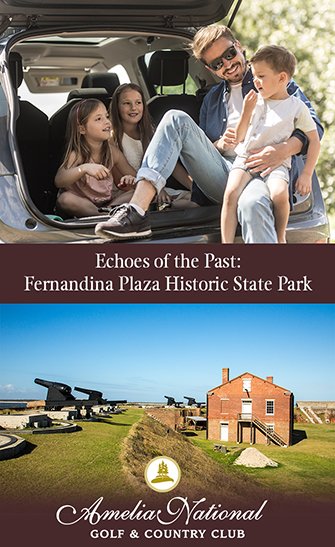 located just east of Amelia Island, has long been a historical lure.

Its geographical significance dates back thousands of years to native peoples, explorers and conquistadors, plus centuries of American history. It doesn’t take long to find a historical marker while you cruise Fernandina Beach streets or enjoy Amelia Island’s Atlantic beaches.

History, however, is everywhere, and we’re spotlighting one of the smallest historic spots near Amelia National. Read on for more on Fernandina Plaza Historic State Park.

A hidden patch of history

The park is surrounded by historic homes, including the one at 212 Estrada Street that starred in the 1988 movie “Pippi Longstocking” and is known as the Captain’s House (circa 1888).

But the park space is what’s important: it served as the parade ground/plaza for the Spanish Fort San Carlos, and Fernandina Beach’s original location. Centuries before, the area was used by native peoples, and later, as a river landing for European troops and explorers.

The early 19th-century Fort San Carlos is gone — its location a mystery — and today’s Fernandina Beach is further south. But its Plaza remains, as do original street names from the 1811 Spanish site plan. Historical markers will coach you up, then grab a seat on a bench to enjoy sunsets over the Amelia River.

You’ll be following in plenty of historical footsteps.

Want more? Allow us to prove how historic your new hometown really is.

If you’re a new or soon-to-be Amelia National resident, learning Fernandina Beach and Amelia Island history is a great way to get acclimated to your surroundings.

Listing everything would necessitate endless scroll, but the area’s three museums — the Amelia Island Maritime Museum and Amelia Island Museum of History in downtown Fernandina Beach, plus the American Beach Museum in nearby American Beach, a historic African-American beachfront resort — are good starting points. So are historical walking tours.