History is all around when you live at Amelia National Golf & Country Club. 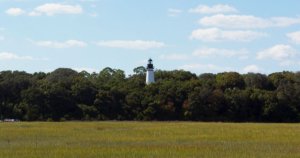 and waterways have attracted civilization from way back — and we do mean WAY BACK.

Native people likely were its first residents. Then, the past five centuries have witnessed discovery, colonial settlements, wars, and finally stabilization and peace.

Flags from eight European and North American countries and ruling entities have flown over this northeast Florida corner, and you don’t have to strain to find a monument.

If you’re a new Amelia National resident, there’s no better way to soak up your surroundings than to learn local history. Start with the city’s online resources, then visit the area’s museums and historic sites.

Let’s start with a true beacon — the Amelia Island Lighthouse.

In the 18th and 19th centuries, many people and commodities arrived here by boat.
Amelia Island is Florida’s northern-most barrier island, and its northern tip overlooks the mouth of the St. Mary’s River, which forms the border between Georgia and Florida.

A lighthouse was — and still is — a critical tool for vessels seeking land and safe inland passage.

The circa-1838 Amelia Island Lighthouse is Florida’s oldest, built during the territorial period before Florida become a U.S. state in 1845. It still guides ship traffic from the St. Mary’s to Fernandina’s harbor.

The Amelia Island Lighthouse stands 67 feet tall, is made of bricks re-purposed from a circa-1820 lighthouse on Georgia’s Cumberland Island, and is maintained as a working light by the U.S. Coast Guard, though the city oversees it and its grounds.

Its original lamps burned whale oil. But it has beamed a French, third-order Fresnel Lens — visible from 15 miles away — since 1903, and was automated in 1970.

Plan ahead to visit

As befits an icon, the Amelia Island Lighthouse is carefully curated by city management.

The site, off O’Hagen Lane only minutes east of downtown Fernandina Beach, is open to the public each Saturday from 11 a.m., until 2 p.m. To access the lighthouse, you must register for a tour. Those are held on the first and third Wednesdays of each month.

Ready for your Amelia National lifestyle? Talk to us here.