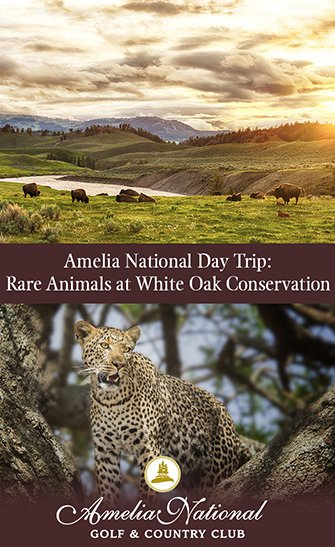 As a nod to the golfing movie Caddyshack, maybe even a groundhog!

But the big, rare animals you usually only see in zoos? Some of those happen to be located only a half hour from Amelia National, and they aren’t in a zoo.

Here’s how to day-trip to White Oak Conservation.

Philanthropist Howard Gilman established the conservation program at White Oak in 1982, on acreage his family had owned since 1938.

Kimbra and Mark Walter bought the property in 2013 and have continued White Oak’s wildlife conservation mission. Their Walter Conservation organization also contributes to wildlife needs, protection and research across the globe.

It’s near the St. Mary’s’ River, which forms the border between Florida and Georgia and adds wetlands to the White Oak landscape.

From Amelia National, head west on State Road 200. Turn right at U.S. Highway 17. Stay on U.S. 17 until you reach County Road 108. Turn left and head west for just under 17.5 miles. Turn right on Lessie Road. Turn right on White Oak Road, then a quick left on Owens Road. Follow the signs and you’re there.

As of this writing, White Oak offers only private tours via reservation. Call 904-225-3396 or email [email protected] to make one.

Many animals here are critically endangered or threatened in their native ranges of Africa, Asia and India, or here in North America (the Florida Panther, for example)

And, rare is the operative word. How about a Bongo Antelope? A Gerenuk (think a giraffe-like deer)? A Maned Wolf? A Somali Wild Ass?

White Oak’s most recent residents are approximately 30 Asian Elephants, many retired from the Ringling Bros. and Barnum & Bailey Circus in 2016. They’re set to occupy a new 2,500-acre habitat at White Oak beginning in 2021.