One of the best aspects of pursuing a new custom Florida home is the ability to zero in on an architectural style. At Amelia National Golf & Country Club in Fernandina Beach, we offer an intriguing possibility from the moment you enter its gated driveway — French Provincial. 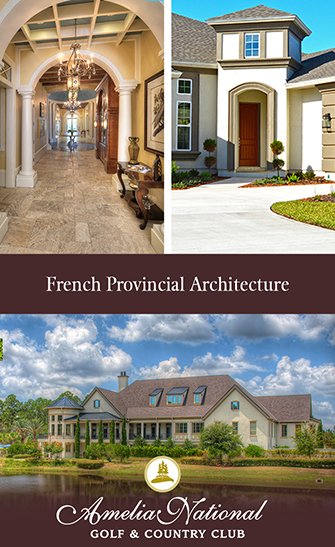 It’s a time-honored classic befitting this exclusive, amenity-filled community on Florida’s northeast coast, and a look that can be at home almost anywhere.

You’ll find more timeless architecture among our Amelia National floor plans, all of which blend seamlessly with the neighborhood’s ponds, coastal forests, beautiful landscaping and Tom Fazio-designed golf course. Plus, Amelia Island’s Atlantic beaches are only minutes away.

But, if your architectural interest is piqued by Amelia National’s gatehouse and its awesome clubhouse, know that both are French Provincial in design. If you like the look, read on to find out how you can feel at home in Amelia National.

Although the style’s enthusiasts can name many characteristics, these are basic elements: high-pitched roofs, shutters, smooth stucco exteriors, tall, arched windows, old-world ornamental embellishments such as iron balcony and porch railings and shutter brackets, and brick and copper accents. 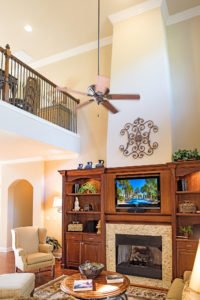 Soft white, slate-blue, olive green and terra-cotta red are some of its traditional companion colors, along with textured woods and linens.

As of this writing, there are four one-level floor plans available at Amelia National that include a French Provincial-style elevation. In architectural terms, an elevation means a home’s exterior appearance or design, not its physical height.

You have many choices that blend with the Florida climate and siting — Coastal, Craftsman, Vernacular, Tuscan and Mediterranean, for example. But since we’re spotlighting French Provincial (also known as French Country), check out the following floor plans on ICIHomes.com. While you’re there, take the 3D virtual video tours, and visit the photo galleries and interactive floor plans.

Ready for your Amelia National lifestyle? Talk to us here.